The Datamatrix is a 2-dimensional code consisting of black and white cells arranged in a square pattern. A datamatrix contains text and/or numeric data. Their storage capacity depends on the number of cells.

The datamatrix can also be read with the camera of a smartphone thanks to dedicated applications.

The datamatrix is mainly used in the industrial field to ensure mass serialisation and product track & trace.

Prooftag offers a whole range of seals, labels, sleeves, cards and documents with visible or non-visible datamatrix to ensure serialization. We favor datamatrix for needs where track & trace takes priority over consumer interaction.

In addition, Prooftag offers you software such as:

CertiTRACK to ensure a unitary tracking of products

Prooftag also offers a secure variant of the datamatrix with Cryptomatrix™. 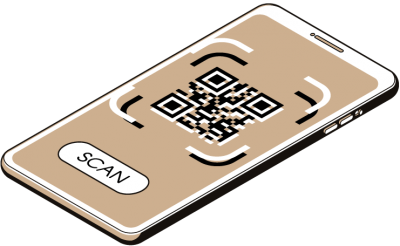 The QR Code is a 2-dimensional code, known as a matrix code, consisting of black and white cells arranged in a square pattern. The coded information can be text and/or numeric data. Their length depends on the number of cells in the code. The contents of the codes have redundant data in order to reduce the risk of losing information due to scratches.

The QR Code can be read with standard industrial equipment such as hand shower reader and high-speed reader.

The QR Codes are also readable with the camera of smartphones. Some smartphone manufacturers such as Apple and Samsung have integrated the reading of the QR Code natively in the camera. No more need to download a dedicated application.

The QR Codes were originally a traceability technology that later found a worldwide rise in the world of digital marketing. It is the only technology that has succeeded in creating a link between the physical and digital worlds.

The QR Code at Prooftag

In addition, Prooftag offers software such as:

Prooftag Cerv, for the online management of your digital marketing applications

CertiDOCS for the production and issuance of secured documents

QR Code is preferred in applications where the user/consumer needs to verify the authenticity of a document or product.

Prooftag also offers a secure variant of the QR Code with CryptoQR™.

Pages
Pages
We use cookies on our website to give you the most relevant experience by remembering your preferences and repeat visits. By clicking “Accept”, you consent to the use of ALL the cookies.
Cookie settingsACCEPT ALLREJECT
Manage consent

This website uses cookies to improve your experience while you navigate through the website. Out of these, the cookies that are categorized as necessary are stored on your browser as they are essential for the working of basic functionalities of the website. We also use third-party cookies that help us analyze and understand how you use this website. These cookies will be stored in your browser only with your consent. You also have the option to opt-out of these cookies. But opting out of some of these cookies may affect your browsing experience.
SAVE & ACCEPT